When Does Conception Occur?
From Ovary to Uterus

So, exactly when does conception occur? That is the question. There are many things that have to happen pre conception, but...

Short answer: Conception occurs when the egg is released from the ovary at ovulation and meets (is fertilized by) the sperm waiting in the fallopian tube. One sperm burrows into the wall of the egg which signals cells to grow and develop. This is the moment of conception, occurring within about 24 hours of ovulation. 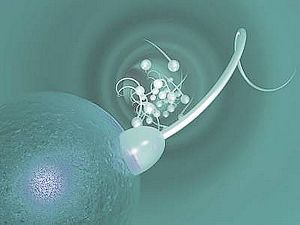 Long answer: When does conception occur?: Your egg cells are maturing inside of ovarian follicles inside of your ovaries during the follicular phase (first part of your ovulation cycle).

At the end of this phase, ovulation occurs when the egg is released or burst from the dominant follicle through the ovarian wall. And the luteal phase (last part of your cycle) begins.

Where does conception occur?

The egg is then swept up by the fimbria and pushed into the fallopian tube. Fimbria are hair-like structures at the end of the tubes at the site of the ovaries.

The egg is then fertilized by the awaiting sperm usually just inside the fallopian tube opening. The sperm actually burrows through the wall of the egg. This action stimulates the cells to divide and multiply among other changes.

Read more about what happens at conception here.

Fertilization of the egg by the sperm is the actual moment of conception, occurring within about 24 hours after ovulation. With most instances of conception happening within 12 hours of ovulation.

Successful conception, however, does not occur until the embryo implants into the endometrium of the uterus. This is when you are considered officially pregnant. Which happens about a week to 10 days after ovulation.

If the egg is not fertilized, then it begins to degenerate. The egg usually lives about 12 to 24 hours before it dies completely and is absorbed into the body to be eliminated.

Once fertilized (conception takes place), the embryo then travels to the uterus (womb) by slight contractions and tiny hair like protrusions (cilia) inside of the fallopian tube. This action is one cause of ovulation pain and cramping.

When the fertilized egg reaches the uterus, it then finds a good spot to burrow into the endometrial lining of the uterus. This is where the embryo gets its nourishment. This is the site of the umbilical cord attachment later. This pregnancy implantation signifies a successful conception and you are now officially pregnant.

The growing embryo then emits a hormone called hCG (human chorionic gonadotropin), the pregnancy hormone. This hormone is detected by pregnancy tests.

HCG tells your body (corpus luteum) to continue to produce hormones such as progesterone and estrogen necessary to sustain your pregnancy. Click here to discover more about natural progesterone cream.

Once implanted, the embryo continues to grow and develop. And 9 months later a baby is born.

So, when does conception occur? The time of conception is when the sperm meets the egg. This happens within 24 hours of ovulation. But as you can see, many things happen before and after the moment of conception. And successful conception happens at implantation about a week later.

The Fertility Realm › Ovulation Cycle › When Does Conception Occur

The Fertility Realm › Luteal Phase › When Does Conception Occur