One sign in predicting ovulation is to check your cervix (vagina) for cervical mucus (CM) (also called cervical fluid (CF)). Throughout your cycle these fluids will change in consistency. You should check for these changes daily to get an overall picture of your system to determine when you are ovulating.

Cervical Mucus: What to look for 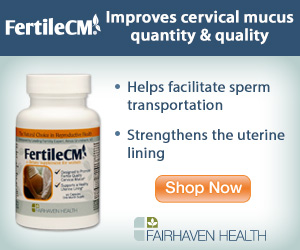 It is completely normal to have more than one 'patch' of the most fertile ovulation discharge (either watery or egg white). And also note that you can have EWCM and still not ovulate.

That is why you should choose more than one method of ovulation prediction. Checking your cervical mucus and checking your basal body temperature ( BBT ) is a very good combination.

The ovulation mucus method will help you predict when you are about to ovulate. And, conversely, the BBT method will tell you when you have ovulated after the fact.

You may also wish to take a third method of checking for signs of ovulation just to be sure. I usually combine the above two with using ovulation predictor kits (OPK). Or you may like to try a fertility monitor. Whatever you are comfortable with and your budget allows.

To increase the amount of CM, which is vital if you plan to conceive, make sure you drink plenty of water. You may also want to try evening primrose oil to increase the quantity and quality of your CM naturally.

Continue to Cervical Mucus page 2: When to Check